Ants come in many different shapes, colours and sizes, and pose many different traits when it comes to potential property damage and human encounter.

Ants are typically considered to be just pesky, however, read our pest profile below and you’ll soon discover how these minuscule insects could be damaging your property.

To treat ant infestations, we offer an all-inclusive General Pest Control package which effectively eliminates  Ants, Cockroaches, Webbing Spiders, and Silverfish – all in one go!

We provide a full 12-month warranty for inside ant treatments however, we cannot provide warranty against outside ant baiting due to weather restrictions and neighboring properties harboring ants.

See our pricing page for more information on treatment costs.

Identify your ant pest problem with our list of ant profiles below.

The Argentine ant is one of the most irritating pests to eradicate. They can be characterised to swarm and infest large areas of land, and spread their colonies in a very vast and fast-paced manner. Due to their plague-like nature, these ants quickly became the subject of an eradication campaign in Sydney, which ran from 1950 to 1983.

Unlike most ant species, the Argentine ant does not travel to avoid conflict when establishing a new nest, as the new queen is quick to borrow workers from the previous nest and build right next door, hence the colony’s rapid expansion and infestation tactic. It has been estimated that infestations of the Argentine ant grow at a rate of 200 meters per year!

The population of a single Argentine ant colony may vary from a dozen ants to many thousands with extensive amounts of nests. During the warmer months, there is a rapid increase in the presence of Argentine ants, and satellite nests are established close to food sources so that the larvae and pupils are fed. The ants may only abandon these satellite nests if they are disturbed or when the food source runs out. Over time, this web of interconnected nests may cover hectares of land, however, the good news is that because of their interconnection, Argentine ants can be eradicated using long-lasting pest control.

The eggs of an argentine ant are pearly white in colour and usually take between 12 days to 2 months to hatch. The larvae can continue to grow for a further sixty days before emerging as a pupil. The average time for an Argentine ant to fully develop is usually between two and three months.

Due to the large volume of Argentine ants per colony, they will utilise every available food source in order to feed the vast number of occupants. This means that they will turn your path and driveways into miniature highways inside of your house, along with monopolising other native ant colonies on their way.

Argentine ants have even been known to invade household fridges, swarming over unopened goods, and spiraling down screw top lids to get at the contents inside airtight jars. They will even attempt to snooze with you for your warmth, however, these pesky insects will not nest inside your premise.

Black ants are just as pesky as Argentine ants when it comes to food theft. They have an extremely sweet tooth and prefer to search for your sugary goods before hunting down your baked goods. Even though these ants may not cause major structural damage to your property, they are just as unsightly and unhygienic as other unwanted household insects.

Black ants have developed a system where individuals are responsible for specialized duties within their colony and can be divided according to their job. Sterile female ants are known as the worker ants and will build the nest, whilst fertile males forage for food and the fertile queen ants almost remain exclusively inside the nest to look after larvae.

As active insects, black ants tend to nest outdoors, however, they are often found in ceilings and under paving. Foraging worker ants make a nuisance of themselves indoors, as they travel extensively in search of food and building materials. You can identify where their nest is located by following a thin trail of ants back to the nest.

Carpenter Ants can be found nesting inside your home in areas such as the kitchen, bathroom, living room and other cosy quarters. The walls of their nest are smooth and sandpapered in appearance, with shredded sawdust-like wood fragments carried outside. These piles of wood fragments may also contain portions of other insects and empty seed coats, and are often found beneath openings such as windows and doors, or the nest opening itself.

You may also find these ants living outdoors in amongst tree trunks, on your plants or in rotten wood stumps. If you find 20 or more large sized ants in a single location within your house, you may want to call Enviro Guard to inspect your property, as there is a good to fair chance that they’ve already established a fully functioning colony.

Carpenter ants will often extend their colony into the structure of your house, which means removing pieces of your home, and boring into wood. They do not eat the timber, however, they will discard of the wood consequently causing structural damage to your house.

Like black ants, carpenter ants enjoy raiding your food stores in search of fruits, insects, meats, syrups, honey, jelly, sugar, grease, fat, and honeydew. Workers have been known to forage for food as far as 100 meters from their nest. The good news is that carpenter ants do eat termites, which means that they nearly never co-exist in the same household.

Carpenter ants lay eggs that are cream coloured and oval like in appearance. Larvae look like legless grubs, which later cocoon themselves into silken, tan-coloured wraps to continue their growth process for another month. Winged swarmer ants emerge from mature colonies between March and July, where they will mate and establish new colonies in a cavity of wood. Each new couple will then lay between 15 and 20 eggs in fifteen days.

To prevent a carpenter ant infestation, you should keep your trees and shrubbery trimmed to ensure that they do not come in contact with your house. You should also correct any moisture problems such as leaking roofs, chimneys, plumbing, poorly ventilated attics and blocked gutters. Be sure to replace rotten or water-damaged wood, remove dead tree stumps, and eliminate wood to soil contact. Store firewood away from the house, and only bring in only enough wood to burn after examination. Lastly, seal cracks and crevices in your home’s foundations, utility pipes, and near electrical wiring occurs. 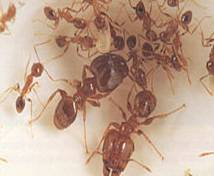 Coastal brown ants are thought to have originated in southern Africa and have now spread all over the world, entering many suburban homes. Coastal brown ants are similar to a black ant, by which they won’t cause significant structural damage to your home, but they will unhygienically feast on your scraps and invade your kitchens and bathrooms in search of food.

Coastal brown ants do not favor wet or waterlogged soils, and will subsequently enter your house in search of food and shelter. They may also be found nesting in nearby trees and shrubs. These cheeky little pests do not march elsewhere to mate, instead, they will hitch a ride with you into suburban areas through pot plants, landscaping materials, or simply on you.

Unlike other species of ants, coast brown ants have many queens in their colony to utilise their reproduction strength. Unfertilized eggs produce male ants and fertilised eggs produce female ants. The female ants are considered to be the working ants of the colony, who will care for the young, collect food, and build the nest. There are two types of worker ants, each with a different sized head.

There are two types of worker ants, each with a different sized head. The worker ants with a smaller head will typically be the hunter-gatherer, and the larger headed working ant will defend the colony. The queen and male ants are very rarely seen outside of the nest.

Singapore ants are major nuisances for people and plants alike. These feisty ants can be found gnawing away in houses, stores, garden, and crops.

The most troublesome attribute of this formidable pest is its attraction to plastics in electrical equipment, irrigation pipes, and other household appliances.Not only does the Singapore ant wreak havoc in the home, but they are also a major pest in tropical agriculture, especially where hand cropping is

Not only does the Singapore ant wreak havoc in the home, but they are also a major pest in tropical agriculture, especially where hand cropping is practiced. These ants will give a nasty bite, and love to damage soil where they nest. They can also spread soil and plant diseases, and rot crops due to their nesting rituals. 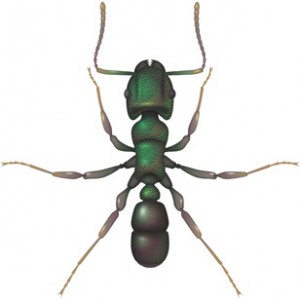 Green Headed ants are a widespread pest that administers a nasty sting! These little pests can be found in your backyard, local playgrounds and everywhere else you don’t want them to be.

Green Headed ants typically nest underground below logs, stones, shrubs, decayed tree stumps, and even termite mounds. These ants prey on smaller insects and honeydew as their main food source, but they are no strangers to a picnic! Green Headed ants colonize new areas through ‘budding’, a system where a subset of the colony leaves the main colony to populate and nest at an alternative site.

Green Headed ants like to mate in spring and are quite efficient at reproduction. Unlike other ant species, the worker ants can mate with winged males. Considering that the workers can take over the reproductive role, the queen ants are relatively insignificant and quite rare to find in these colonies.

Green Headed ants aren’t necessarily a threat to your property, however, they pose a large threat to the wellbeing of your family if they’re found living in your backyard. Green Headed ants have a nasty sting, which has been known to cause anaphylactic shock in sensitive people. Besides their nasty sting, these ants can be helpful in removing other pests such as beetles, moths, and even termites.

Fire ants are a dangerous species of ant that produces a nasty sting. These ants are best known to swarm their prey then kill it, like the Indiana Jones movie. You do not want these ants colonizing around your home!

Fire ant colonies nest in the soil and are usually found in open and moist areas such as parks, river banks, pond shores, watered lawns, and highway shoulders. The nest will usually be hidden under timber, logs, rocks, or bricks, however, if there is no shelter for nesting, they will create a dome-shaped mound. Fire ants mostly consume young plants and seeds, but will often attack small animals for a feast. These ants are very aggressive and have been known to push other native insect species away from their habitat.

Fire ant colonies are founded by groups or singular queen ants, which can produce an entire colony within a month! Fire ant queens may live up to 7 years, and can produce up to 1,600 eggs per day and produce as many as 250,000 workers in her lifetime.

Unlike other ants that bite and then spray acid, fire ants bite initially to grip onto their prey and then inject toxic venom called Solenopsin. For humans, this produces a painful, stinging sensation – similar to a burn, hence their name.

If you are concerned about the ant species around you home, call Enviro Guard Pest Management on 1300 669 092 NOW.

Email us for a Quote

...give us peace of mind...
Tina Kennedy
LJHooker Nerang

...have never had any complaints...
Melanie Knight
LJHooker Paradise Point